As the team goes through their final paces days out before the big day, Dragons’ sat down with Sachin Brennan the youngest player in the Youth League team. After Julian and Ezra lost a forward and centre at the beginning of the year, it was Sachin who got the call up and he hasn’t looked back in his maiden senior year. Currently in year 11 at Camberwell Grammar, Sachin play’s juniors in the U18s on a Friday night and still he has managed to juggle his 11 Youth League games trouble free. Have a read as we get an insight of his experiences and views on the Youth League season and Sunday’s Grand Final. We look forward to seeing all Dragon supporters on Sunday, let’s all get behind the team and this young up and coming star. 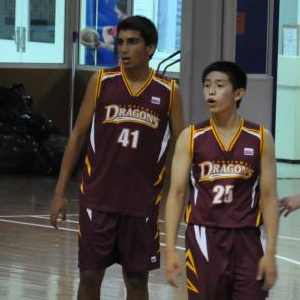 CD: You’re the youngest player in the team; does that ever make a difference?
SB: Being the youngest on the team isn’t that different, it’s being new to the team and the league. Youth League is a much faster and bigger game than I have played in previously – Julian, Ezra and the team are really supportive and I feel I am improving because of them. John Young, especially, has been a really great teammate in helping me develop my game week to week.

CD: Every player has years more experience than you, who is the standout player in your eyes?
SB: I have joined a phenomenal team; each player is a standout in their own position. If I had to pick I would say Mark Jeffers for his leadership and his play making and Matt Barr for his ability to score from anywhere.

CD: You average less than 10 minutes a game but are fourth in the league for blocks. You added 2 crucial blocks in the dying minutes in Sunday’s Semi Final. The guys got right behind you how does it make you feel to be a part of such a strong team environment?
SB: I always feel nervous when I first come into the game, let alone the last minutes of a 4th quarter. I am happy I was able to contribute to the team’s success, when I got my two blocks. A timeout was called after it, everyone started cheering and this gave me a huge confidence boost and really illustrated the strength and bond in the team.

CD: What will it take for the team to beat Coburg on Sunday?
SB: The key to beating Coburg will be playing our brand of basketball – running in transition, always talking on the court and not being overwhelmed if they go on a run.

CD: When Julian subbed you in with only minutes remaining, game in the balance, how was the feeling?
SB: At first I was surprised and nervous, but when I got on the court my mind was on doing my job, thankfully that turned out well.

CD: It was great to see many of your U18 teammates at the game on Sunday, what is one message you can send them and all Dragons supporters for the Grand Final?
SB: Firstly I would like to say thank-you to all my U18 teammates and everyone that came down to support us. This Sunday is the Grand Final so we need everyone to be there and cheer us on, having the crowd behind us will be a big boost to our game.