Congratulations to the Camberwell Dragons Youth League Women’s team who have taken home the Division 2 Championship in stunning fashion.

On what will be remembered as one of the greatest days in Dragons history, the Youth Women have defeated the Sunbury Jets to secure the clubs first ever Women’s championship, and just the second championship for the club. 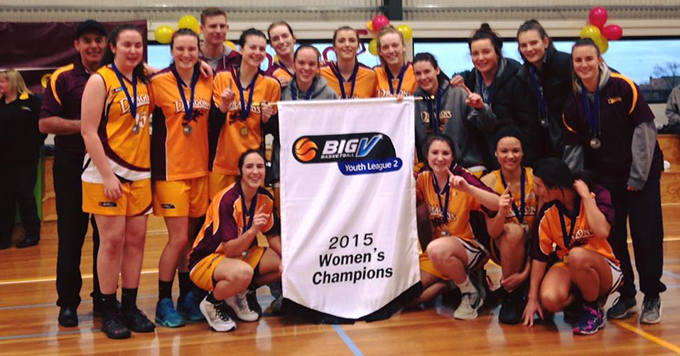 The day was opened up in fine fashion with the senior women progressing to the preliminary finals in front of a packed house. It was the perfect way to start the action at the Dragon’s Lair, and the crowd was only getting bigger. By the time 2pm came, Balwyn High School was packed to the rafters, and screaming with noise to watch the Youth League 2 Championship game. And it did not dissapoint.

These 2 sides have met 3 times this season, with each game being tight until the very last quarter, and this game was to be no different. The first period saw both teams off to a nervous start, but it was the Dragons, lead by some terrific shooting by Michelle West, that took a 3 point lead, 15-12. The second and third periods told a similar story to the first. It was big play after big play throughout, with the dragons defense, led by Caity Tayleur, Zanelle Marama and captain Rachel Bett, giving them an important 9 point lead heading into the final term.

But it was at the start of the 4th that Sunbury went on a big run, and got within just 2 points with 4 minutes remaining in the game. Sunbury have been the best offensive team all year, and their run meant that the away crowd was getting loud, and the home crowd nervous. But the experienced girls in the team stepped up and continued to believe. In what was a terrific final term for Rachael Nevin, she hit a couple of crucial jump shots and took some big rebounds in the dying minutes to give the Dragons a 2 possession lead. And from here, the girls showed why they have been the best team all year. The league’s best defensive team showed exactly why they have earned that title, and with some great team defense, were able to push away. The buzzer went, with the Dragons taking a 5 point victory, and the Youth League 2 Championship with it.

Camberwell veterans Zanelle Marama (5 points, 13 rebounds, 3 assists, 3 steals, 2 blocks), Rachel Bett (4 points, 5 rebounds, 5 assists, 3 steals) were both spectacular. But it was Michelle West that was awarded the MVP for the game, finished with a game-high 23 points, to go along with 7 rebounds. For the complete box score CLICK HERE.

After what has been an incredible season for the Dragons, they are deserving winners of the Youth League Championship, and have proved that defense wins championships. We would like to congratulate Head Coach John Hauer, and Assistant Coaches Heath Anderson and Brad Hauer, and Team Manager Georgia Wilson for doing a terrific job, bringing these young players together, and guiding them to success. It was been a fantastic achievement and we as a club are extremely proud of what the girls have done.

Congratulations to the entire team. It has been a pleasure to watch you this season, and you will forever be in the Dragons history books as the first ever Women’s championship team, and the second club championship team. Thanks to Amber Carr, Brittany Morkham, Caity Taylor, Em Wilson, Grace Ramadan, Kim Watson, Lauren Moran, Lucy Schneider, Meg Wilson, Michelle West, Rachael Nevin, Rachel Bett, Sarah Verdonck, Zanelle Marama and Zoe Scott.

To all spectators who came early and packed out the Dragons lair, the club and the team would like to thank you for making the atmosphere incredible, the noise deafening, and the occasion so special. VJBL finals time is coming up in the coming weeks, and we hope the club can continue to support each other, and continue this amazing success the club has had in recent times.

Camberwell Dragons and the Youth League Women’s team would like to pay special tribute to the following people that have helped on many occasions during the season: Georgia Wilson, Charlotte Grieve, Anthony Cullen, Chen Lay Hwa, Julian Fields, & Justin Boyd. We would like to thank everyone that supported us on Sunday at the Grand Final. From all the players players parents, siblings, partners and extended family, to the Senior Women’s and Men’s, and Youth Men’s Big V Teams, and all the junior Dragons VJBL players and coaches. To everyone else that chipped in across the day, week and year, we are very thankful.