Dragons fans. This weekend at Balwyn High School, Mark Jeffers plays his 150 Big V game. Tip off is at 6pm. Get down to celebrate this great achievement with him!!! 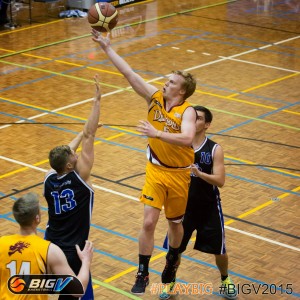 Mark joined us for a couple of questions.

Obviously you originally played for Bulleen Boomers to start your Big V Career, but spent the majority of it at Camberwell. What does it mean to have reached this milestone?

It’s pretty exciting to know that I have managed to last 150 games in the league. There have been times when I thought I have had enough but I genuinely enjoy playing way too much and would miss the lads way too much. Hopefully I can now try and make it to 200.

You started playing Big V when you were 18-19. You’re not a young man anymore, almost 25 years old. Whats the biggest difference between then and now?

I started as a bench guy with the Bulleen Youth League team when I was 17 and in year 12. I went into that season not expecting any minutes but ended up getting a pretty good crack at showing what I had. I guess the biggest difference is the fact that I went from being a guy trying to learn as much from my older teammates as possible, where as now I am more of a leader on the court and trying to help out some of our younger youth leaguers coming into the team.

You’re know to work pretty hard on the training track and throughout preseason…… How much emphasis do you place on bicep curls and bench press in the offseason?

I have a strict belief in no cardio in the preseason, just hit the weights. But as soon as I got to 89kgs this preseason (and couldn’t afford a gym membership) I went the opposite way. I started smashing out some 1km time-trials to try and drop a bit of weight.

You’ve been apart of some great moments with Camberwell. Is there one particular moment that stands out above the rest?

There are a lot to choose from but winning the youth league championship in 2013 with a bunch of great mates and coached by a pretty good bloke (Julian Fields) was probably the highlight. We had been deep into finals the previous two seasons in the Men’s team which was awesome but nothing tops winning a championship at any level. The celebrations at the Harp (sponsorship plug) were pretty awesome as well!!

Its your sixth season at Camberwell, you’ve played with plenty of players during your time here. Is there a favourite teammate?

I have had a lot of favourite teammates, for the amount of time we got to play together I would say Kevin Anstey as we had great times on and off the court. But to be able to play with two of my best mates Matt Barr and Josh Smith was also a highlight.

What’s grown more since the start of your career, your game or your muscles?

My gut/butt combo has probably grown the most…

Who’s been the biggest influence on your career and why?

Chris Anstey was probably the biggest influence on my game in the 2012 and 2013 seasons. He forced me to play with confidence and start to believe that I was more than capable of playing at this level. He told me one night at the harp ‘You’ve got to hit the court and have the attitude that you’re going to beat your opponent every night’ and that is something that I have tried to do and pass on to my teammates/kids that I coach.

Some may say you’re the spiritual leader down at the Dragons. You’ve got a big role in the junior program and you’ve been apart of the senior program for years, as well as a position on the committee. When its all said and done, is there someone next in line you’d be happy to relinquish that role too?

I honestly don’t think anybody would want my role at Camberwell, it’s quite time consuming. Over the next couple of years as I slow down I will pass the reins of starting point guard over to Tom Clifford but I have no intention of finishing up on any other roles at the club.

In all seriousness mate, congratulations on the 150 game milestone. Speaking on behalf of everyone that’s been around since you came to Camberwell, we are lucky to have you. The club would definitely not be where it is today without everything you have done for it.  It’s been an honour both playing and watching you. We’re hoping to get a big crowd down at Balwyn High School for both yours and Rach Betts milestone game. You got a message for the dragon fans??

Thanks for coming and keep getting down to as many games as you can, the BigV program really needs and appreciates your support. The players love seeing new faces down at the games and are always up for a chat. Hopefully we can get a win this week for you. Go Dragons!