2pm on Sunday afternoon at Balwyn High School, the face of the Big V Justin Nelson will coach his 300th game. 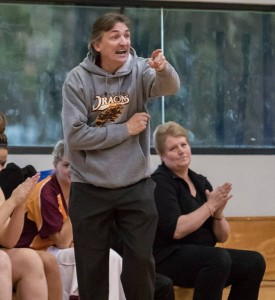 This weekend one of Big V’s household names joins the elite and enters the 300 Club. Justin Nelson is well known for his old school antics on Big V TV or hosting duties at Big V Award nights (really anyway he can get his face out there). This weekend he is reaching his 300th game as a Big V coach, and we invite you, the Big V community, to come along and help this league legend celebrate.

After having a year away from the game in 2014, he made a new home for himself with the Camberwell Dragons in 2015. And in just his second season with the club, he will bring up his 300th game coaching the Division One Women’s team on Sunday.

Prior to joining the Camberwell Dragons, he had been a part of the furniture at Warrandyte. Not only coaching their senior Women’s program for numerous seasons, but also spent time as President, assisting in the building of the Warrandyte association from the ground up. The 2013 season was his last as head coach, and he achieved arguably his greatest moment at the club, claiming the Division 1 Women’s championship. Winning games are hard, and winning Champions don’t come around often. But after years of planning and puzzle solving, with player movements, VJBL development and Youth leaguers, he gained the ultimate glory in any sport, a Championship title.

He decided to call it day, ending on the highest of notes. But after spending the year finding himself, taking long walks along the beach and sipping hot chocolates it was time to get his teeth back into coaching. Having a maroon fixation he soon found himself at the Camberwell Dragons in charge of another Division One team.

Justin wasted no time in his new home at Camberwell, building a competitive Division 1 team in the off-season that was ready to make a mark where the club hadn’t before. The team, and coach had a fantastic first season finishing equal second. It was an amazing achievement in 2015 making the Preliminary Final. As all losses leave a bitter taste, they also bring hunger. The 2016 team will look to go one further and make club history in a Grand Final appearance.

Sunday’s game is not just another game of basketball; it is a celebration of someone who has dedicated himself to the consistent development of the Big V for over a decade. He has invested his time to the game of basketball, and built relationships with people who share his love and passion for the game..

The Camberwell Dragons would like to invite all friends, family, past players and fans to come and support Justin on Sunday as he brings up his 300th game in style. On behalf of the Warrandyte Venom, and the entire Big V community, the Camberwell Dragons would like to congratulate Justin on what is truly an amazing achievement. No one is more deserving of this great honour.