Zanelle Marama is one of the most well known players within not Camberwell Dragons, but the entire Big V Family. Having joined Camberwell’s senior program since the teams debut season back in 2008, she has not missed a season, playing over 150 games for the club. At just 23 years old, she has made a name for herself in Victoria’s premier basketball league, with her biggest achievement being named the best centre in the league in 2009. This season we saw Zanelle take her leadership and experience to the Youth League program, where she has recorded career best statistics, averaging 8.2 points, a league leading 13.4 rebounds, including 6.9 offensive rebounds, 2.4 blocks (second best in the league), and 1.8 assists. It has been a great season for Zanelle and her team and she took the time to chat with us, days before playing in her first championship game. 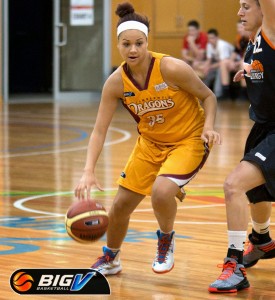 CD: You have been playing Big V for Camberwell since the beginning of the women’s program back in 2008. But this is your first season playing Youth League. Talk about that transition?

ZM: It’s been a really fun, successful and enjoyable season. The style of basketball in Big V Women’s Competitions compared to Youth League is quite different. Obviously the majority of players in Div 1 are more experienced and tend to be a little bit older – hence the style of play is slower paced and more structured. Division 1 is also a lot more physical as there are bigger bodies, especially in the key. YL on the other hand is certainly more of a run and gun style of play, so a lot faster paced and more up and down – which often means I find myself out of breath trying to keep up with half the girls! In terms of coming in to the group, all the girls and coaching staff have been super welcoming and friendly so it’s been easy to find my feet within the team.

CD: In your 8th season of Big V, you’re playing in your first championship game. What makes this team different from the others?

ZM: There are a few things which I think make our team unique and that have been a contributing factors in our success. Firstly, I think the depth of our team is amazing. We have a large squad of 14 players at the moment, all of which are talented and bring something different to the table. I think that’s really great to have an squad full of players that can contribute to the team when they hit the court, rather than having to rely on just one or two individuals. Anyone on any given day can step on to the court and impact the game – and I think each and every person has demonstrated that this season in their own way.  I also think having a group that gets along really well off the court is equally as important and we are lucky to have that.

CD: You’re the most experienced player in the team; does that ever make a difference?

ZM: I think having played for a number for seasons now just gives me a bit of composure on court. I’ve played in a lot of games – plenty that have been blowouts and probably equally as many that have gone down to the wire . So I think that playing experience just allows me to remain relatively calm during games no matter what the situation is.

CD: You average over 13 rebounds a game, leading the league in that statistic, and having 2 games with over 20 rebounds this season. What’s your mentality when it comes to rebounding and what advice can you give to young dragons who look up to you?

ZM: I know a lot of people think that being skilled at rebounding comes down to height or positioning or athleticism (which obviously are contributing factors) however, I think determination and commitment to get the rebound are also really important. The best advice I can offer is to hustle hard after everything. For me personally, half of my rebounds come at the offensive end and I think making a commitment to putting in the extra effort to get after an offensive board even if I’m being boxed out, rather than just running straight back to defense, makes a big difference to my numbers.

CD: Your team is incredibly loud on the sidelines and the group seems really close. How does it make you feel to be a part of such a strong team environment?

ZM: Our team does have a great culture and work ethic and I think we owe John and his coaching staff a lot of that credit as he has successfully fostered a great environment. For us, during training and during games, the focus is not on us as individuals, but rather the focus remains on us as a team. This means we all work hard for each other and concentrate on getting the job done as a unit rather than as individuals. Which is part of the reason we are so loud on the bench – everybody gets around each other and offers support in the way of cheering; which not only provides support for the players on the court but often psychologically gets in the head of our opponents – so its a win win. It feels great to be a part of such an amazing team and I am lucky to call the girls not just my team mates but my friends.

CD: You average 8 points and 17 rebounds against Sunbury this season. What do you have to do personally to help your team get the victory?

ZM: For me personally, I think I just need to continue to focus on the bigger picture, concentrating on the 1% ers throughout the game which all add up. I think focusing on staying disciplined in defence, not committing fouls, hustling after rebounds and loose balls, selecting the right shots to take and continuing to be vocal on court will all help.

CD: What will it take from a team perspective to beat Sunbury on Sunday?

ZM: As a team the sentiment stays very similar. We need to continue to work and hustle harder than Sunbury. As a team we have been the best defensive unit in the competition throughout the season and we find ourselves up against the best offensive team. So we need to focus on containing Sunbury’s offensive output by locking down on team defense – which will allow our offense to flow from there. We’ve really come together over the past season as a team, so now is the time to reward all the hard work we’ve put in and execute our sets.

ZM: To cheer loud to cheer proud. We definitely hear all the support and encouragement from the sidelines and it feels amazing to have the support of the club behind us; especially on our home court. Go dragons!