It might be hard to believe, but Rach Nevin has only been with the Camberwell Dragons since 2014. Only in her second year at the club she has become one of the most familiar faces around the senior program, and an important piece in the Women’s Youth League team. At 22 years old, Rach started playing in the Big V at 19 years old for the Whittlesea Pacers. It was here that she established herself as a consistent performer, winning 2 team MVP’s, averaging 8.8 points and 7.7 rebounds per game throughout her young career. She has brought this experience to the Camberwell Dragons, winning the team MVP last season, and is a major reason that the Youth Girls are heading into the Grand Final this weekend. Rachael recently spoke to us about her time at the Dragons, and how she is feeling about Sunday’s game against Sunbury. 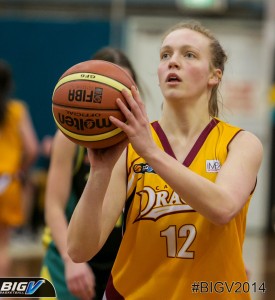 CD: In your second season at the Cambewell Dragons what is has been the biggest difference compared to last year that has allowed you to be more successful?

RN: I think that the team has geled together even more this season now that we know one another better. The addition of some new players this season has brought with it different skills and strengths which has  given our team more variety and made us more of a threat in our competition.

CD: We’re expecting a packed crowd this weekend, with no free seat in the stadium. Have you even played in front of that many people before and how do you think you will react?

RN: I have played in some domestic finals before but nothing like this. I’m really looking forward to the finals atmosphere. It’s a bit nerve racking to play in front of so many people but without the supporters the finals just wouldn’t have that excitement factor!

RN: The impact that our new players have made this season has been outstanding. They have all brought new dynamics and great personalities to the team and fitted in with the group perfectly.

CD: Your teams defense was the number 1 ranked in the league. What’s the teams approach to defense and how have they been so successful with it this season?

RN: John has pushed our team really hard defensively this season. At training we worked on our communication and our rotations so we were functioning as a unit rather than individuals. Having each others backs has been key.

CD: You’re one of the more experienced players in the team. How do you think your nerves are going to be come Sunday?

RN: I think it is only normal to be a little nervous coming into such a big game but we need to support each other as team mates, have a good warm up and focus on what we are there to do!

RN: Make sure you get there early to get a seat and cheer really loudly! We appreciate everyone’s support and encouragement and hope that we can make you all proud.