Max Barkeley has starred for our Camberwell Dragons Mens team all season. He grew up in Vancouver, Canada before attending high school in Southern California. Max played NCAA basketball at Simon Fraser University and Victor Valley College before competing in mixed martial arts for 3 years whilst completing his degree. Max decided to move to Melbourne with his Australian partner, Ellen, and got the urge to continue his basketball career. He decided to reach out to our D2M coach for a tryout, and it’s fair to say that the tryout went pretty well… 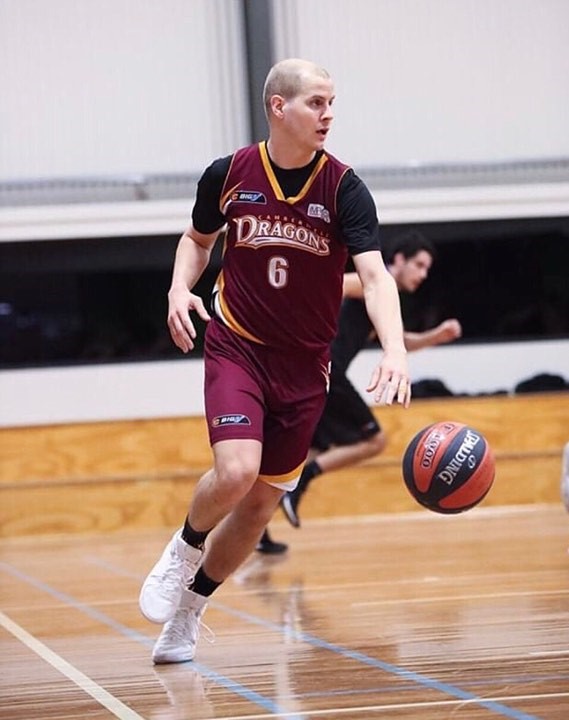 CD: Thank-you Max for taking some time to answer a few questions in what will be a busy and exciting few weeks of this Grand Final series. Tell us how you’re feeling after the weekend’s wins.

MB: It feels great to have beaten Mildura when probably not a lot of people thought we were going to, especially after losing Game 1 the way we did. I know how much history this group of guys has had against that team and to be able to part of the team that got over the hurdle and into the finals with back to back wins is an awesome feeling.

MB: Mark and Ray always have us fully prepared with the scout and game plan on a weekly basis and this weekend was no different. A great team film session mid-week helped us to play to our strengths and adjust to what they like to do and try to make them uncomfortable. At the end of the day we truly trusted each other and believed we could get two wins at home and that’s exactly what we did.

CD: As most of our fans will know, you are from Canada. How have you adjusted to playing in Australia and how would you say the Australian game compares to Canada/USA?

MB: In contrast to the North American game, I find Australia has a bit more reliance on structure and help defence whereas back home there is typically a lot more length and athleticism and the game can be based on the pick and roll or isolation more so than here. There are some slight rule differences in FIBA basketball to NCAA and stuff but it’s really just the same game when it comes down to it. I think the main adjustment came from not playing any basketball for 2-3 years and just having to get back into the swing of real games and the pace of this level of basketball.

CD: Now that you call Camberwell Dragons home, what have you liked about being involved in the club?

MB: The people. Hands down this group is the most close-knit of any basketball team I’ve been on. I really enjoy spending time with the guys and competing alongside them. Everyone has always been real welcoming from the moment I came to play at Camberwell.

MB: Probably the last weekend of the regular season because we had to win both games of a back to back to keep the #2 seed and a first round BYE. The games were absolute battles and we won each by just two.

CD: You’re a very passionate and fiery player, can we expect to see some fire over this grand final series?

MB: I would say it’s a safe bet to say I will express some emotion through the series.

CD: As the team’s leading scorer, nominated for MVP and All Star 5, do you feel any pressure leading into this grand final series?

MB: Not really. As long as I prepare without taking shortcuts and continue to try and play harder than anyone on the floor while being a great teammate/leader, the rest usually takes care of itself. I can live with whatever the end result may be.

MB: If we prepare and focus on the task at hand like we did last series and go out and leave no doubt that we could have played any harder or done anything more for each other, I like our chances.

MB: It truly makes a HUGE difference when you pack our home games and get loud cheering us on. As you saw this weekend, it’s a very tough environment for an opposing team to play in. Take pride in being an integral part of the club and come down with friends and family to cheer us on so we can get off to a great start in this finals series! Go Dragons!