Well, the time has almost come. Only 2 days away now until the Youth League Dragons take the floor and look to fight for the Championship against the Coburg Giants. 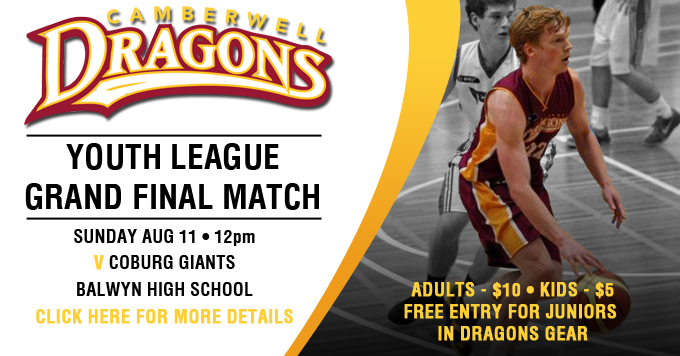 With a massive crowd guaranteed, the Dragon’s Lair is set to be loud and hot on Sunday at noon with the top 2 teams playing off in what is sure to be the biggest game in Camberwell Dragons history. Led by club star and team captain Mark Jeffers the Dragons will go in full of confidence.

Jeffers had a massive game in the semi-final, finishing with 22 points, 7 rebounds, 7 assists & 5 steals and he will look to again lead from the front this weekend. He wont be alone with the leagues 3rd best scorer Matt Barr and the Mandible himself John Young right behind him continuing their finals form.

Head coach and Camberwell legend, Julian Fields had this say about the upcoming clash:
“The old adage “defense wins championships” probably couldn’t be any truer for this Sunday’s YL2M final. Both teams were top 2 in scoring throughout the season with the Dragons edging the Giants by 7ppg. Clearly both teams can run and score. Stringing consecutive stops together will prove critical as well as the battle on the boards. Last week our team focus and preparation was really pleasing. We adhered to our game plan and managed the flow of the game with great poise. Mark Jeffers as Captain was a huge factor in this and was exceptional in all facets of the game. As a group we pride ourselves on playing with great energy and effort, and this alone gives me confidence that we’ll be right there at the end of the game with a chance to win our clubs first Big V championship.”

Its going to be a huge day for the Camberwell Dragons, and were inviting all past & present players and supporters to get down to Balwyn High School from 11pm to help us celebrate what a great season the boys have had this year.
Club legends will be there, superstar players from the past few years will be there, the Vultcha Kevin Anstey will be there. Dragons supporters, wear your colours, bring the noise, and get ready to rumble as the biggest game in Dragon history is upon us.