4pm on Saturday afternoon at Balwyn High School  marks the 100th time Rachel Bett will walk on court in Camberwell Dragons colours. Make sure you get there to help her celebrate this great milestone 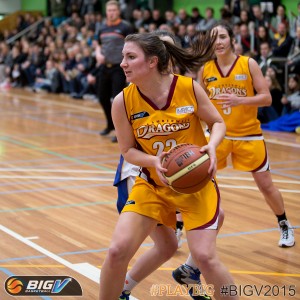 Rach joined us for a quick chat to discuss the milestone.

It’s a big achievement you’ve reached Rach, are you excited for the upcoming milestone and day?

It is really exciting, but it’s also just another game and that’s how I want to approach it. We’re in a good place early in the season and have a tough game against Warrandyte that we need to be ready for. So yes, it’s exciting but I’m more concerned about getting a win!

It’s a short list of players at Camberwell that have reached the 100 game mark. How does it feel to be joining some of the legends of the Dragons to play this many games for the one club?

It’s really exciting. I remember as a younger player watching the Camberwell big v teams playing hoping that one day it would be me so to reach 100 game for the Dragons is an honour.

You are a one club player, having been here for over 10 years. What do you thinks changed at Camberwell and what’s kept you playing here so long?

It’s been awesome to see how the club has grown and developed over the last 10 years. The depth and competitiveness of the club has been really exciting to watch. The people around the club have definitely been the biggest reason I’ve been playing here for so long. I’ve found some of my best mates at dragons.

You have played here a long time ‘ducky’. Do you remember your first Big V game and what can you tell us about it?

Haha yeah I do. I remember thinking how cool it was that you got to warm up to music and I’m pretty confident that I turned the ball over the second I touched it even though I was specifically instructed to just get the ball over half court! I was just so stoked to get on the court and be involved.

Last year you were the captain of a Big V championship side, the first women’s team to do so. Talk about that game, and the feeling you had the moment you knew you were a championship captain?

It’s definitely one of the most exciting and memorable moments in my basketball career. We knew it was always going to be a game that we would have to grind out and we were lucky to have the support of so many dragons fans there on the day to get us over the line. Caity Tayleur had two free throws in the dying seconds of the game and it was that moment that I knew we were going to win. I think the best thing about winning last year was being able to share it with such a great group of people.

Is there one person that you can pinpoint that’s been the biggest influence on your career?

My under 18s Coach John White has probably had the biggest influence on my basketball career. At the beginning of our first season I’m not sure if he knew exactly what he was going to do with me or where my role would be on the team but he moulded me into being the type of player that I am today. It was under his coaching that I started to really take my basketball seriously and began to have the confidence that I could be competitive after I had aged out of juniors.

We’ve all experienced something embarrassing happen on the basketball court. Want to share any particularly embarrassing moments with the dragons fans?

I can’t think of a specific moment but I have definitely thrown up a few air balls in my time, including in our grand final last year! There is also nothing more embarrassing than trying to catch the ball with your face. I’ve had a few falcons!

This weekend also marks the 150th Big V game for a close friend of yours Mark Jeffers. Does it make it anymore special for you sharing this achievement with someone like that, and do you have any words of advice for him?

I guess it’s a pretty bizarre coincidence that we both have game milestones on the same night. I’m sure he wouldn’t say it’s anything special though. His game probably doesn’t need any advice from me, and he definitely wouldn’t take it anyway but I will definitely be telling him to shoot the ball!

Rach congratulations on the 100 game milestone. Knowing you for as long as I have, there’s no one that deserves it more. You’ve given so much to the club, and we’ve been so lucky to have you for such a long time. Hopefully there’s many more milestones, awards and championships to come in the future. Is there anything you’d like to say to the Camberwell faithful before the weekend?

Thanks so much for coming down each week to support the big v teams. There is nothing better than stepping out on court knowing that there is a stand full of people getting behind you. The program doesn’t function without the support of the club and its members so we all really appreciate your support!