Justin Nelson is probably the most well know name around all of the Big V. Not only has he proven himself to be a fantastic personality on the web show Big V TV, but also has been a successful coach for the past 13 years. Justin has coached at some of Victorias biggest clubs, including a stint at the Ringwood Hawks with their women’s team, and an impressive 8 years with Warrandyte’s senior women team, winning a championship. After a year away from the sidelines, Justin decided it was time to pick up the clipboard and resume his coaching career with the Camberwell Dragons. And his first season at the lair has been nothing but a success, leading a relatively new side to finish second on the ladder, leading the team into the clubs first senior women preliminary final. The face of the Big V took time out of this very busy week to share his thoughts on his first year at the club, and the upcoming Saturday Night preliminary final. 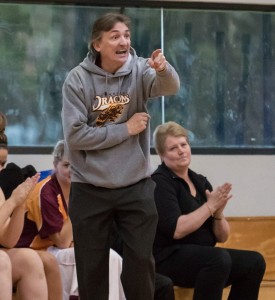 CD: Thanks for taking the time to have a chat with us before the Preliminary Final, Justin. What was most pleasing about your win against Latrobe on Sunday?

To get that first finals win with a new group was probably the most pleasing thing overall, but the way we played during the middle quarters in particular was good to be a part of. At both ends of the floor you could see how much the girls wanted the win. Nothing beats hard work and they did that in spades.

CD: This is your first season at Camberwell and it’s always tough knowing how a new team is going to perform. What were your goals for this team to begin with? And have they changed as the season progressed?

We had two goals at the start of the season and they haven’t changed one bit. We wanted to produce a winning culture at this level for the Dragons and we wanted to make finals. I’m pleased to say we’ve ticked those two boxes, and then some.

CD: You finished second, what has been the biggest contributing factor to the success the team has had?

They get along really well and they follow instructions. Basketball is not rocket science, there is no substitution for hard work and it’s always a far better environment when everyone gets along. I’ve been doing this at the senior level for 13 years and to be honest I can’t remember a better group to be around. It’s the little things that bring success and this group does the little things well.

CD: You’re a busy man with Deakin Melbourne Boomers and Big V TV. How do you find the time for family as well as the Dragons?

Great question. I live on very few hours sleep and I love what I do! I’m a big believer that if you love what you do, go hard and give it everything you’ve got. If you don’t love what you do, find something else that interests you.

CD: There are some characters in your team and at the Dragons, what separates them from other clubs in the league?

I get to watch and talk about a lot of players and clubs, especially doing Big V TV for the last six years. The Dragons are a fantastic club and absolutely filled with characters. I think the thing I like most is that they are genuine people, they keep it real and have all been really welcoming. There’s never a sad face at the Dragons, so that tells you a fair bit about the family culture around the club. I’m looking forward to spending more time with everyone over the coming years.

CD: You are yet to make an appearance at the Harp. When this season is over, is there a chance that Justin Nelson might be seen letting his hair down?

Haha, how did I know that question was coming! Though people see this non-stop talking and stirring person on Big V TV, and coaching for that matter, I’m actually fairly reserved out in public, so it might take JB shouting the first few rounds! I’ll make it there, trust me.

CD: Whittlesea finished first, only losing 2 games this season. What do you have to do to get your first victory over them this season?

Play every second of every minute. Basketball is about getting momentum and working damn hard to keep it. We’re young and still learning, this is the sort of game that will teach us plenty of lessons – good and bad.  To get the win we need to be tough at the defensive end and productive at the offensive end. It will be tough, but we’ll have a red-hot crack. That’s the way these girls play.

CD: You have said publicly that Mill Park Basketball Stadium is one of the hardest places to play during finals. You will need as many Dragons fan’s behind you as you can. Do you have a message for them?

Absolutely, it’s a bloody jungle out there during the finals and it certainly helps to have some fans in the stand. I’ve won and lost finals out there and I know how much easier it is to silence their fans when you’ve got plenty of your own screaming out for you. To all our Dragons fans, get out there and support the girls, I hope to see you and hopefully we will put on a great show for you.