Elyce Lambrou has been at the Camberwell Dragons since the 2013 season. But she has been in the Big V a lot longer than that. She began her career playing with the Sherbrooke Suns, in 2006 at the age of 16. In 2007, she moved up to Divison 1, and joined the Hawthorn Magic. It was at Hawthorn that she grew into the solid, fundamental point guard that she is today. After 5 season with the Magic, Elyce showed how much of a consistent player she is. She’s not going to stuff the stat sheet with a huge amount of points or rebounds, but she is going to help your team win. And it was this winning attitude that she brought to the Camberwell Dragons in 2013. Moving across from Hawthorn, Elyce brought consistency and hard work to the Dragons, and has immersed herself into the culture of Camberwell. She is now not only the captain of the senior women side, but also head coach of the girls Under 16 1’s, and a major part of what makes this club great. Elyce sat down with us 1 day out from her first preliminary final at Camberwell and talked about her time at the club, and tomorrow nights game. 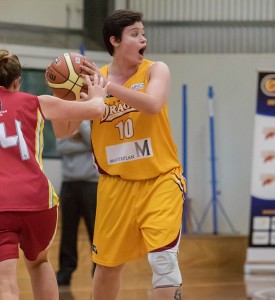 CD: It’s now your 4th season at Camberwell, what do you love most about this club?

Something I’ve loved about camberwell is the real family culture. I noticed it when I first came to the club and loved how I was embraced and welcomed to the team. Its always a lot of fun at Camberwell, whether it be at the trainings, family days or down on a Sunday morning coaching.

CD: You have become a huge part of the club, coaching the Under 16 1’s. Has coaching helped your ability as a player, and whats the best advice you can give your team as they develop as basketballers?

I’ve absolutely loved my time coaching at Camberwell. Firstly the 12.2’s and currently the 16.1’s. Coaching has definitely helped my basketball IQ, which is something a lot of coaches talk about. I think if I were to give advice, it would be that there is no substitute for effort. A coach loves nothing more than a player who gets there 5 minutes early to do some ball handling, or someone who does the little one percenters like diving on the ball.

CD: Your partner Fred and your family are often seen at many of the games. They must be very proud of what you have achieved, not just this season, but over the last 4 years at Camberwell?

My parents love coming to watch. They have since I was about 9 when I started rep at Nunawading. I think the team has come a huge way. I’ve seen huge improvements in my own game under the former coach Brian Vaughns, and at the same time the team has slowly climbed up the ladder. This year especially with Justin Nelson.

CD: Sunday was a huge day for the Dragons, you progressing through, and the youth girls winning a Championship, all in front of a huge crowd. What was it like being a part of that day?

Being a part of winning on Sunday was a great feeling. Especially the sheer amount of support we received from the crowd. That was the best part. I’m incredibly proud of the youth league teams accomplishment of winning their Grand Final. So happy for them as a group to collectively meet their goal of a Championship. I was even lucky enough to sit behind their bench and experience their encouraging environment.

CD: The crowd was very pro Camberwell on the weekend, and its expected to be the opposite this weekend. Do you feel nerves before a game like this, and how do you deal with them?

Nerves are a hard one. I think we have prepared hard all season, even since last October to be here. So I think we go into this week with the knowledge that we have done all we can to prepare for this game. Although of course there will be some before game butterflies, but I’m sure once we are out there all will be good.

In relation to the crowd, of course it will be a big change from this week. Whittlesea have amazing atmosphere at their games, and an amazing fan base that will be behind the league favourite for the title. Hopefully we can snatch it out from under them!

CD: What’s it going to take to get your first victory against the Whittlesea Pacers this Saturday Night?

Whittlesea have some big players, and an incredible import from America. I think if we buckle down on rebounds and get through the first half staying close to them, in the second half we have a good shot of running them off their feet. Our ability to run is a big part of our game, and Whittlesea have been able to shut it down the previous times we have played them. Hopefully we get it up and going early on Saturday!

CD: What message do you have for the Dragons fans before the big game?

We need you more than ever on Sat night!!! Please come along in your Dragons colours, Loud and Proud!!! We would love to see as many people as possible to get us up and running in our first Div 1 Grand Final!!!