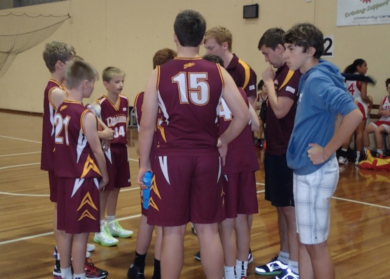 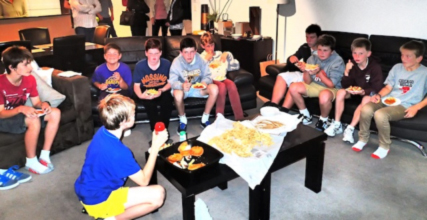 The under 14/1 Boys had a great tournament in Adelaide over Easter, not only with great results on the court but also having a lot of fun off the court. The boys won all their group games for the tournament going into finals undefeated with a 5-0 record.

In game 1 the boys tried their best to give me a heart attack by giving up a 12-0 start against Blackburn. After a quick timeout and letting the boys know they weren’t just on a holiday they responded well and went on to win the game. Highlights of the game were Conor Mathews air-balling a free throw (payback) and Max Uzunovski hitting more 3 pointers than his brother Marcus.

Game 2 we came up against a Collingwood side we had previously lost to and somebody who is in our grade for the VJBL season. This game was an aggressive game which must have got all the boys fired up as we got the hard earned win by 13. Highlights were Matt Hobson stepping up as point guard and JT realising I wasn’t really that scary as he stepped up and played an important role.

Game 3 saw us play a great defensive game against Warrandyte. The boys won the first quarter 10 to 0 after tough defence which lead to easy offense. This set up an easy win for the boys. Highlights were Devin O’Keefe dominating a VC player from the opposition and Lachie Earl’s on-ball defensive pressure.

Game 4 was a tougher one, so I let Jonny McCafferty take the reigns after the first quarter. We managed to beat South Australian side Sturt who actually had a lot of height and a great ball carrier. I can’t really add any highlights here apart from Simon Uzunovski embarrassing his wife Jo by being told off.

Game 5 was the final round robin game and decided whether we would finish first or second in our group. We ended up beating Keilor 4 after a great start saw us continue to get a good well deserved win. There were many highlights in this game, Devin O’Keefe actually falling over after being hit on a charge, Marcus hitting a corner long 2 (Not a 3 Marcus!), Max forgetting to put his hands up when catching the ball so being hit in the face and Conor Mathews not air-balling free throws.

We then qualified first in finals which meant coming up against a bit of a rival of ours in Bulleen. The boys started slowly as they looked nervous and a bit tired. However the boys stepped up to play well in the 2nd and 3rd quarters to go into 3 quarter time with a small lead. Unfortunately some calls went the wrong way and some shots rolled out so we were unable to hang on for the win. A major highlight of the game was Thomas Dunstan shooting the lights out, hitting 3 3-pointers with nothing but net. We now know that Thomas will be doing this every game from this point going forward!

Although it was disappointing that some boys in the team couldn’t make it thanks to Conor, JT and Max for stepping up and doing a great job over the tournament.
Thanks to the parents for taking their boys across and making it an enjoyable weekend. Special thanks to Steve Earl for organising everything and being an above average bus driver. I look forward to it again next year

The girls U14.2 team had a fantastic tournament in Adelaide. In our very first match we came up against a strong Blackburn 1 side. The girls came out incredibly strongly, and stayed neck and neck with the opposition for the whole match, eventually going down by just three points in a nail biting finish. This set the scene for the rest of the tournament, where the girls consistently improved their personal and teamwork skills, smoothed over our existing offensive plays and cemented their defence.

We were in a tough pool after A and B grade were fused, and we also came up against South Australia’s state team: Southern Tigers 1. Once again, the girls worked extremely hard, shutting down their two strongest players to keep their scoring down to 9-13 at half time – and had Southern’s coach looking extremely stressed! Unfortunately they pulled away in the final quarter, but Southern went on the win the Grand Final by more than 30 points against Metro 1’s Keilor, making our tough efforts highly impressive!

Highlights included Abi’s lightning fast breaks, Bec’s beautiful shooting under the ring, Georgie’s amazing steals, Lia’s tricky ball handling moves, Mietta’s spider arms in defence, Nikita’s countless rejections and Katie’s beautiful ball control. We are all excited to start the rest of the season and add Ellie and Siobhon to the mix – we should be unstoppable now!

Well done girls on a fantastic tournament, it’s great to see everyone getting on so well and downing so much chocolate – best of luck for the rest of the season! 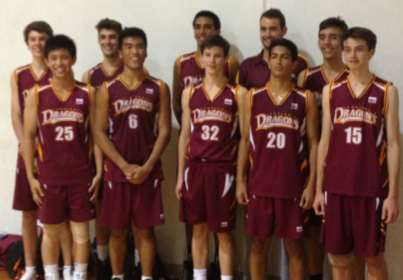 The U18 boys tracked over to Adelaide for the Norwood Easter Classic by plane and car, for many it was a great time to get the L plates up and cross off some hours. For some players the Adelaide trip was their first for others their second and for a few they were trying to make it three Championships in a row. Although we didn’t make a three peat for those, it was a great weekend for players, families and the coach.

We entered into Championship division coming up against some high class Melbourne VC clubs. These included Bulleen, Keilor, Blackburn in our pool games and came up against Nunawading and Bulleen again in the finals.

Game 1: After beating Bulleen the last two meetings we knew Bulleen would be out to prove a point. And that’s exactly how they started; racing out of the blocks we had our backs against the wall. We knuckled down and played some strong contested basketball to get our noses in-front late in the fourth period. With Bulleen chasing with only seconds remaining, Rich took over the coaching and drew up a basic baseline which saw Sach embarrass the Bullen defence securing our first tournament win.

Game 2: Still on a high from last night we came up against Blackburn late in the afternoon. Having played them once before in a previous tournament we knew we could be competitive and make a game of it. However this tournament was a different story, we were down by 13 going into the may break. But the 3rd quarter was not our quarter. Blackburn came out firing and blew us out of the water putting 78points against us by game’s end. It was a good learn curve for the boys to work hard for 4 periods.

Game 3: After a bad loss to Blackburn we had to come out stronger, but we were against one of the state’s best operators in Keilor. We could not have had a worst start though, Keilor out scored us 34 to 4 come the end of the first. Majority of the points coming from our turnovers we quickly changed that around winning the 2nd period. It was a cracking remaining periods with Keilor only beating us by a handful in the 3rd and 4th. After giving away such a large leading in the 1st to the boy’s credit through hard-work and determination we made up for a poor start.

Game 4: We found ourselves Nunawading Spectors one of the household names in junior basketball. We knew it was going to be a tough game and we had to play our best. We made a real game of it leading at half time after trailing for the best part of the half. Nunawading were to strong in the end pulling away with the win.

Game 5: It was time to go to battle vs. Bulleen once more. Bulleen finally got their first win against us in a tough physical clash went down to the wire. With our boys battered and bruised after a long a tough weekend we ran out of legs to get our fourth win against them.

Regardless of the on court efforts it was a great chance for the players and parents to spend some time together enjoying some games of touch rugby, footy, a trip to Handoff & wineries, topped off with a great team dinner on the Sunday evening.

Thank-you to all the players and families that made the trip over to make it an enjoyable tournament for all involved. Special thanks goes to BB & Clare for organising tournament, it is always tough job trying get everyone organise, many thanks!!

Great job boys although it wasn’t the most successful tournament on the court, we will continue to learn and grow as a team as the year goes on. We will look for success in the next tournament.  I look forward to next year.